Excavations are being conducted within the temenos enclosure of a 1st century AD Amun temple at Dangeil, River Nile State, as the QSAP 19 mission is focusing upon the sacred landscape of the late Kushite period in the Berber-Abidiya region. 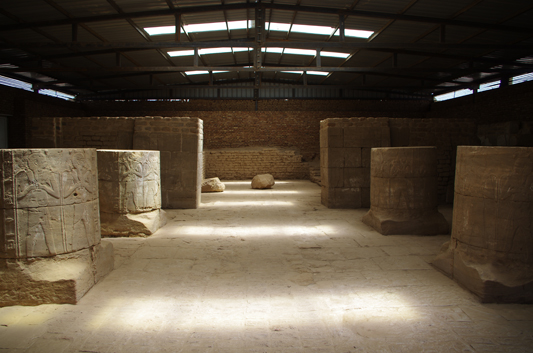 Recent work has concentrated on constructing a large protective shelter (18x16m) over the temple’s sanctuary to enclose the stone columns, altars and sanctuary facings which are decorated with carved images of the Nile god Hapy. He is shown as a plump man who wears a kilt and a headdress of lotus flowers and is carrying two jars. The zinc and fiberglass shelter roof is supported by cantilevered steel beams and fired brick walls. Translucent fiberglass panels allow the carvings to be illuminated by natural light. 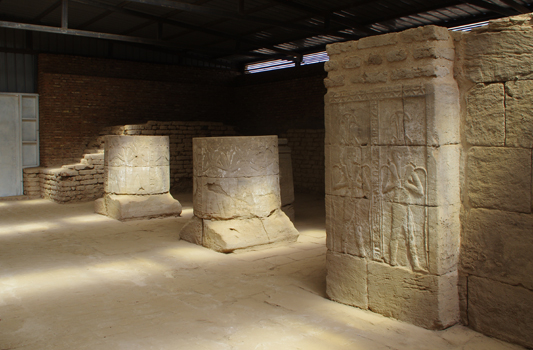 While excavating the temple’s monumental fired brick gate, part of a wall painting was discovered. It was painted on lime plaster and situated on the northern pylon inside the peristyle court. Plans were made to conserve and remove the painting because of its unstable condition, volatility of the pigments and structural instability of the wall. Conservation of the painting, culminating in its successful removal from the pylon wall, was accomplished in autumn 2018. 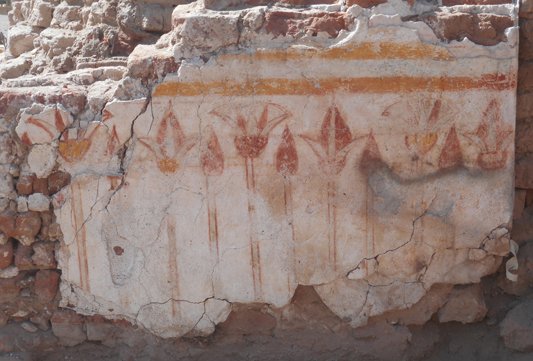 The scene depicted in the painting is a repeating frieze of lotus flowers consisting of an open blossom, followed at a lower level by a bud in the process of emerging, then by a flower in the process of opening. The flowers and register lines were painted in yellow, red and blue pigments on white lime plaster. The red and yellow were ochres, while the blue was the man-made pigment, Egyptian blue. The image formed part of the lowest register on the wall. Measuring approximately 90cm high by 1.2m long, this is the one of the largest Kushite wall painting fragments found thus far in situ in a non-funerary context, and it sheds light on the decorative programme the Kushites employed within their temples.