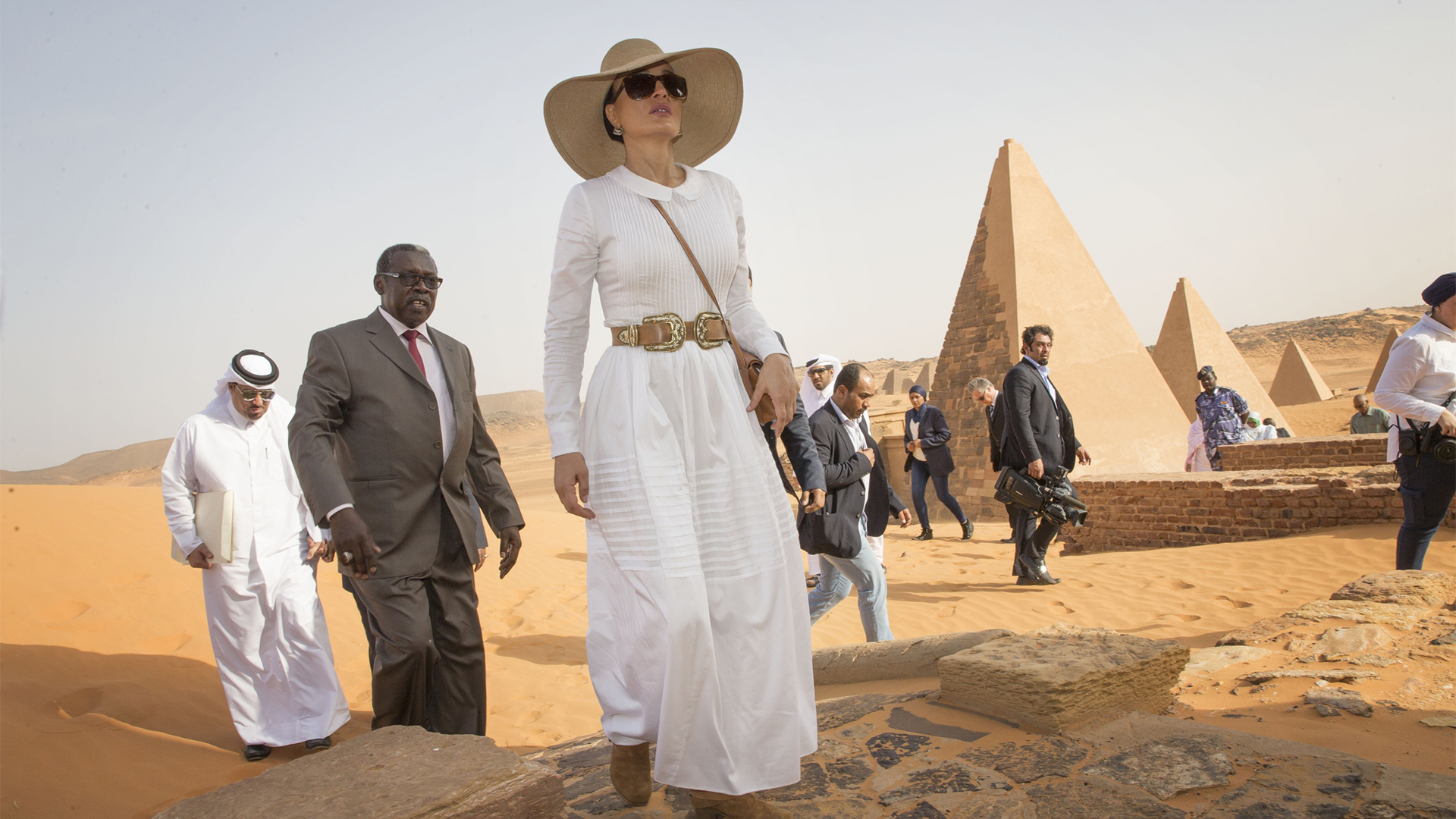 On Sunday, 12th March, HH Sheikha Moza bint Nasser took part in a visit to a site of significant archeological interest in Sudan.  Accompanied by representatives from Qatar Museums, members of the Qatari embassy and media, HH Sheikha Moza visited a desert in Eastern Sudan, along the banks of the River Nile, that holds a collection of ancient pyramids – the Meroë pyramids, located in al- Bagrawiya. The Meroë pyramids have narrow bases and steep angles on the sides. They make up one of two World Heritage Sites located in Sudan, and are a major tourist attraction for the country.

HH Sheikha Moza bint Nasser’s visit focused on the royal cemetery of Meroë, which consists of dozens of pyramids, dating from 8th century BCE to 2nd Century CE.  Many of these pyramids are restored and protected by the Qatari Mission for the Pyramids of Sudan, one of 41 missions that have been operating in the country since 2013 as part of the Qatar-Sudan Archeological Project (QSAP). QSAP is a Qatari initiative, affiliated with Qatar Museums, with the objective of promoting the rich archaeological heritage in the Republic of the Sudan. 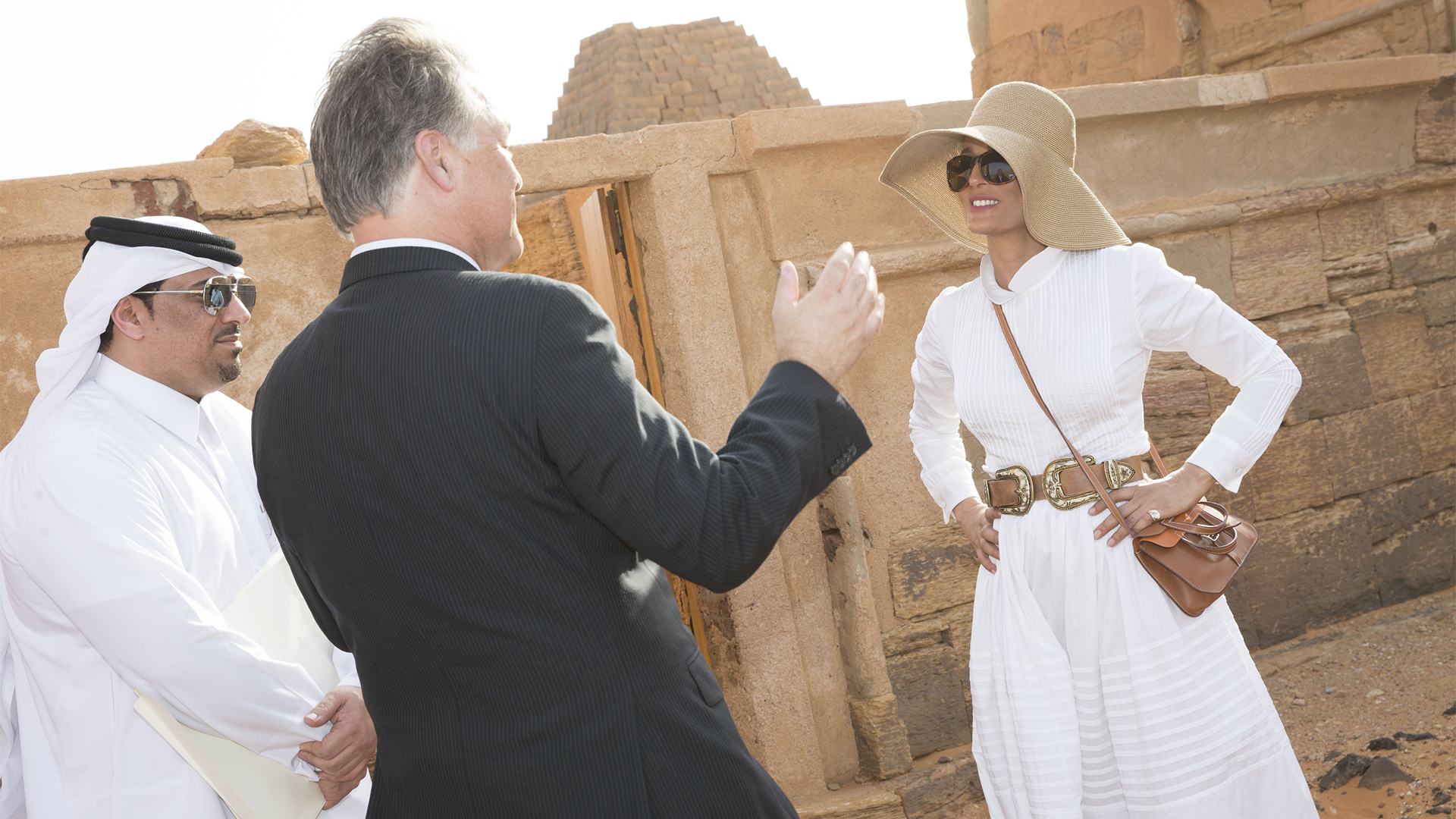 A briefing by Ali Al Kubaisi, Chief Officer of the Division of Cultural Heritage at Qatar Museums on the QSAP initiative

During the visit to Meroë, Ali Al Kubaisi, Chief Officer of the Division of Cultural Heritage at Qatar Museums briefed HH Sheikha Moza on the framework and purpose of the QSAP initiative and its work in excavating, resorting and involving the local population in protecting and promoting cultural heritage sites in Sudan. In addition, Dr Salah al-Din Mohammed, Coordinator of QSAP provided HH Sheikha Moza with an overview of the site and the importance of the kingdom of Meroë.

During the tour of the pyramids, Dr. Abdulrahman Ali, Director of Sudan’s National Cooperation of Antiquities and Museums discussed the damaging effects that windborne sand accumulations had on the sandstone blocks of Meroë, but showed the progress made by QSAP to strengthen the surface of the building materials.

A visit to Nubian House

Dr. Mahmoud Osman, Meroë’s site manager provided HH with an overview of the entire Meroë World Heritage Site, and explained the positive impact that QSAP has had, not only on protecting and preserving the site, but also on educating the local population, young and old, on the importance of the site and its protection and preservation.  Since its establishment, Nubian House has welcomed many school children and cultural tourists.

A visit to ‘Dohat Meroë’

HH Sheikha Moza also visited ‘Dohat Meroë’, which was originally built to house the workers on the site, but will soon open as a hotel.  It was here that she was thanked by the Governor of the River Nile State for her interest in Sudan’s heritage and the State of Qatar for its magnificent support in helping to protect and preserve Sudan’s cultural heritage.

And finally, a visit to the National Museum of Sudan

Finally, during the visit, HH Sheikha Moza also visited the National Museum of Sudan, where objects from the most important excavations, including those recovered from QSAP digs, are kept. Dr Abdulrahman Ali, the Director of Sudan’s National Cooperation of Antiquities and Museums led HH Sheikha Moza through the beautiful collection.