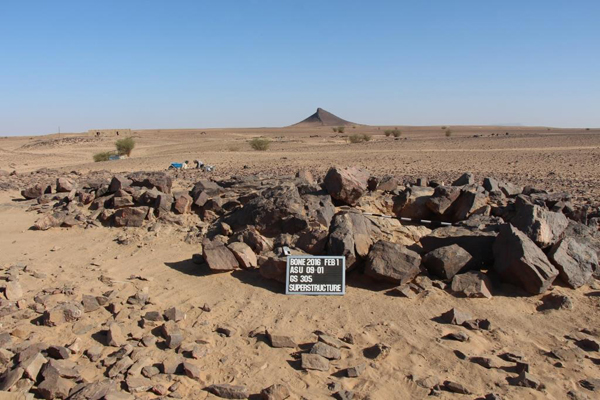 Although no fieldwork was conducted in 2017, plans for the fall 2018 field season are underway.  Lab work at Arizona State University has focused on cleaning, conserving, and analyzing human skeletal remains and ceramics from prior the 2014-16 field seasons west of Mograt Island, approximately 580 km north of Khartoum.  A series of radiocarbon dates from burials at intervisible cemetery sites, demonstrates that grave clusters to the desert terrace accumulated from the end of the Early Kerma period through the Napatan period. Thus, there was no abandonment of the area between the Kerma and Post-Meroitic occupation of the area as had been thought in initial surveys associated with the Merowe Dam project. 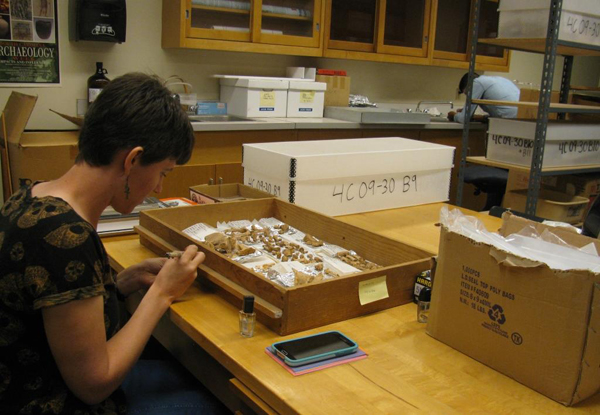 A 50 x 50 m stone fort was discovered in 1968 satellite imagery of the project area in 2015. Because the fort is completely obscured by a mature date palm grove in more recent satellite imagery, it was not previously recorded.  Preliminary testing at the fort site in the 2016 field season revealed a burial abutting the base of the external east wall in the area believed to be a gateway. The fort is constructed of vertically stacked stone slabs like forts at El-Ar downstream and at Mikeisir on Mograt Island, just upriver, suggesting a late Meroitic or Post-Meroitic period construction. Because the skeleton was in very fragile condition, it was removed in several blocks that were excavated in the lab in 2017. A piece of charred material found in soil adhering to the knee area of the skeleton yielded a radiocarbon date placing it with high probability in the 500s to early 600s A.D. This is the first direct date for stone forts in the area. 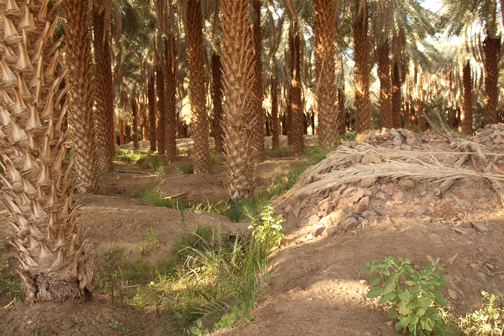 Lab analysis over the past year has also focused on an unusual Classic Kerma phase burial with the remains of a woman believed to have been a potter.  The previously unknown style of pottery associated with her grave and others were determined by petrography to be of the same fabric as other locally made wares, but with different form and design.  This woman was buried with an animal bone tool suspected to be used in ceramic production, and has lesions on the internal surfaces of her ribs, calcified plaques, and a calcified nodule that indicate she suffered from a chronic respiratory disease. Although ancient DNA was recovered from the nodule, it was negative for tuberculosis. Silicosis, an occupational risk of miners, potters, and others who inhale dust and sand particles, is the suspected cause.